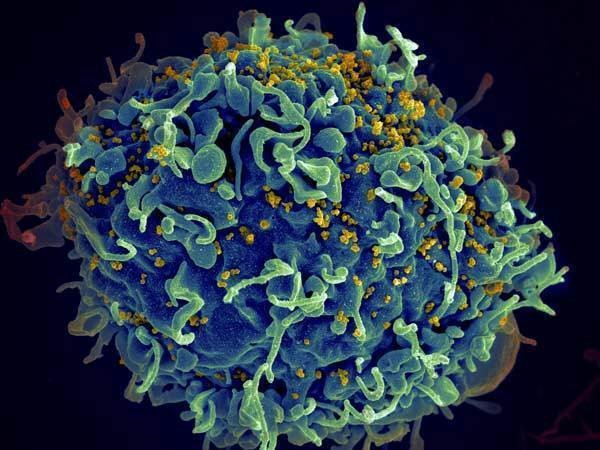 Is an HIV vaccine within reach?

Despite extensive research efforts since the discovery of HIV in the early 1980’s, an effective vaccine has proven very difficult to develop. Why is this the case?

HIV is still a global pandemic

Human Immunodeficiency Virus (HIV) is a virus that attacks a specific type of white blood cells called CD4+ T cells. They do so by engaging a protein displayed on the T cells followed by delivery and integration of its genetic material into the genome of the cells. As such, HIV can take advantage of the cell machinery to mass-produce itself. When the cells break apart, the virus spreads with the blood and infects new cells.

Since CD4+ T cells regulate the activity of other immune cells, depletion of the T cells by HIV gradually weaken the immune system. This has dramatic consequences as infected individuals lose their ability to fight infections that otherwise would have been harmless. This condition is known as “acquired immune deficiency syndrome” or AIDS. Without treatment, HIV infection and progression to AIDS is fatal. The virus is mainly transmitted by unprotected sex, but can also be transmitted via blood or from mother to child.

Why don’t we have an effective HIV vaccine?

To date, a range of different HIV vaccines have been tested in humans, but none of them have provided adequate protection. The most promising results so far were obtain from a vaccine trial in Thailand in 2009, where the probability of becoming infected was reduced by 60%. However, the effect waned rapidly, and after 3.5 years, the study participants had only 31% less chance of being infected. Despite disappointing results, the knowledge gained combined with insights into how the individuals responded to the vaccines have educated us and guided design of new generations of vaccine candidates that are currently being tested in the clinic .

Vaccines protect us by stimulating the immune system to produce antibodies that can neutralize and eliminate disease-causing pathogens, such as viruses. However, traditional vaccine strategies against HIV have failed. One reason for this is that the virus coats itself with a shield consisting of complex sugar molecules so that antibodies fail to recognize the surface proteins in a proper manner to secure protection. HIV also mutates rapidly, which results in small changes in its surface proteins and attached sugar molecules. Therefore, one infected individual may have many HIV variants circulating that play the devils game with the immune system. This makes it impossible for the immune system to raise a robust response against all the different virus variants.

Over the past decade, new discoveries and technological advances have paved the way for a new generation of HIV vaccines. These vaccines differ from previous empirically based strategies in that they are based on an in-depth molecular understanding of how some rare antibodies have the capacity to engage HIV in a manner that allow them to control many variants of the virus and hinder infection. Such rare antibodies are called broadly neutralizing antibodies (bNAbs), and have been isolated from a few HIV-positive individuals. With a structural understanding of how these bnAbs are recognizing valuable sites on the HIV envelope protein (Env), we have gained knowledge about why such antibodies are so efficient. The trick used by bnAbs is to form long hairpin structures that can penetrate the sugar coating and contact the underlying protein part of Env.

This insight has motivated rational design of Env-based vaccines with the hope that they will activate the immune system in such a way that bNAbs are produced. So far, this concept has given very promising results upon vaccination of rabbits and non-human primates. These encouraging data have led to ongoing clinical testing in humans, and answers to whether the vaccines will induce protective bNAbs are expected within the next few years.

In the absence of an effective vaccine, various prevention products have been developed that can keep HIV in check. However, these products do not clear the virus from the body. In addition, the daily need for administration and gender specific differences in drug efficacy make them less accessible to adolescent girls and young women. Specially in lower middle income countries in sub-Saharan Africa and India that are at highest risk of infection. Existing HIV prevention products can also be stigmatizing or difficult to negotiate in sexual encounters. Epidemiological modelling shows that current products can help reduce the number of HIV infections – but that without a vaccine, we will never get to zero.

To ensure that women and girls have access to affordable HIV prevention tools, there is therefore a need for new treatment options until a protective vaccine is in place. In an attempt to solve this, we aim to develop bNAbs as a low-cost HIV prevention product tailored for use by adolescent girls and young women. The product may be given discreetly via subcutaneous injection at the same medical visit as injections of long-acting contraceptives.

To achieve this, we have joined forces with the International AIDS Vaccine Initiative (IAVI) and the Translational Health Science and Technology Institute (THSTI) in India. The project is funded by the Research Council of Norway through the GLOBVAC (Global Health Vaccination and Research) program.

Currently, the teams on three continents are combining unique expertise and technologies in design of bNAbs that will recognize a range of HIV variants, persist in the body for extended periods of time and home to mucosal tissues that are the primary sites of infection. Such optimized design will increase the duration of activity and lead to longer intervals between protective doses. The project will run until 2022 and results will be revealed consecutively.

One thought on “Is an HIV vaccine within reach?”